A wind blew over the water at Beaver Island State Park at 7 a.m. on July 30. I got into a kayak for the first ecotour of the Paddles Up 2022 event on the park’s beach and was pushed away. The water was slightly choppy as the group of kayakers, led by retired government biologist Paul Leuchner, began to travel down the river, heading around the island.

We were there, in the river, exploring nature in places that had been restored, including the East River Marsh and Motor Island.

Leuchner described the birds we saw on our trip: “Motor Island is the only colony of herons on the Niagara River. Thus, a colony is a place where all these species of shorebirds live, such as great blue herons and gray egrets, night herons and little green herons. All these birds are pretty much solitary. They live in the environment, except when it comes time for reproduction. Then they gather in colonies. They may not like each other yet and they do not form lasting sexual relationships. Herons don’t like each other. They will take off from their nest and leave when the young are ready to take off, fly and pretty much be alone. Then it’s over, and the whole colony dissolves. While they are together, they are very protective of each other, even though they occupy different strata on the island.

Birds occupy different places on Motor Island, which people can only visit by boat. Currently, tourists are not allowed to walk around the island.

“The colony is stratified,” Leuchner said, “So at the top you have the great blue herons. In the middle part, above the shrub layer, you have common egrets. Below the common egrets, which you probably couldn’t see today…couldn’t see them…there are night herons.Night herons are sitting under there,and not sure if they are opportunistic birds to take advantage of the feed overhead or if they just need special cover.They are usually night-feeding birds.

“On the ground floor, you will have little green herons. We also heard a marsh sparrow, and someone asked me about it. The marsh sparrow is a small sparrow with a very large mouth. It can sing and it emits patterns of songs to define its territory. You can hear it, but often you can’t see it. They are very common here in the wetlands. There were also a few there.

Paddlers enjoy the fun paddling at Paddles Up. 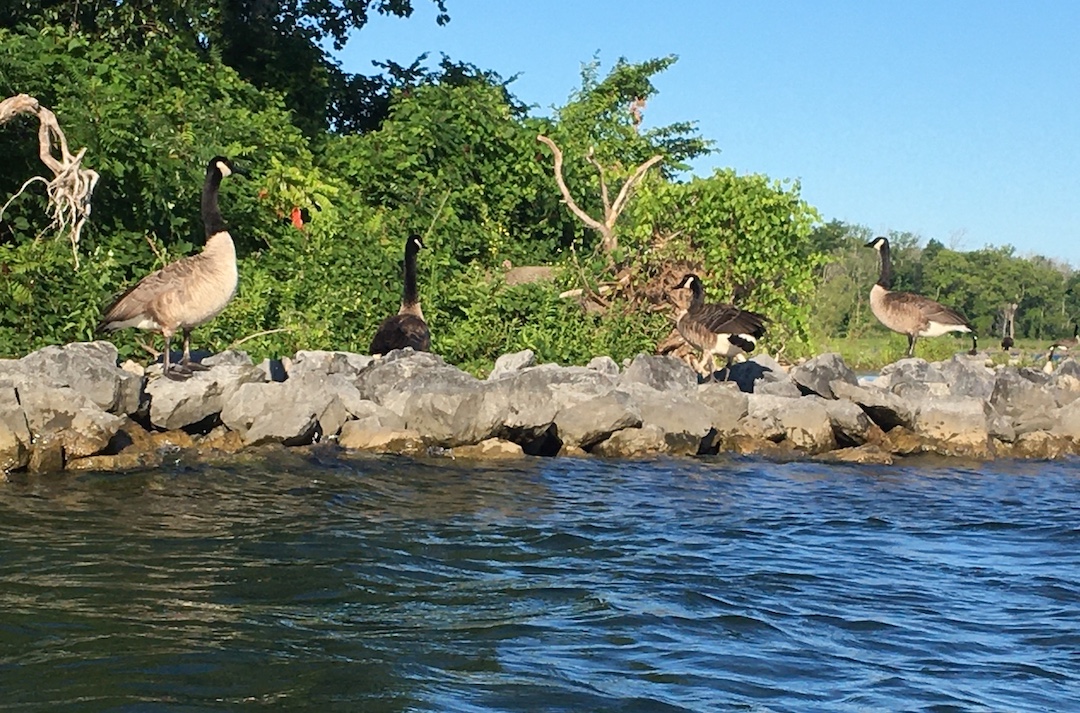 A view of geese on Motor Island

Even if the birds don’t like each other, they will fight to defend their colony from invaders. One day, Leuchner said, a young bald eagle flew into the colony, looking for something to eat. This young bird was unaware of what he was getting into.

“They (the rookery birds) all have their own areas, which they occupy. They don’t really interact with each other until there is an emergency. When you have an immature bald eagle flying around the colony, looking for a quick snack, it mobilizes the whole colony. They go out and do everything they can to make sure that doesn’t happen. I remember the day I saw this, when they attacked this teenage bald eagle, and I’m sure he learned a lesson to never go back to a rookery again.

Leuchner said the young bald eagle would not return, even with a mate.

“We’re talking about these two going against hundreds of birds coming from all directions,” Leuchner said.

He also pointed out that herons can also be dangerous to humans. “Herons are mean. If there’s an injured heron on the side of the road, you never want to go near it. The first thing they’ll do when they’re in trouble is go get your eyes. Call and get help. Don’t worry about an injured heron or an injured egret. Not the kind of bird you want to play with.

Wetlands were once considered wasteful, disease-ridden places best avoided, according to the US Environmental Protection Agency (EPA). Today, wetlands are known to be among the most productive ecosystems in the world, with a high diversity of plant and animal species, Leuchner said.

The great species diversity of the Niagara River Corridor has earned it great recognition.

According to Menter, the ecological significance of the Niagara River Corridor was recognized by the National Audubon Society, when it declared the corridor an Important Bird Area. In 2019, the Niagara River Corridor was declared a Wetland of International Importance, under the Ramsar Convention, a global treaty supporting the conservation and sustainable use of wetlands and related waters. It was the 40e site in the United States to receive such a designation.

Leuchner spoke about the tour after leaving Motor Island.

“We walked through the marshes and looked at the water lilies,” he said. “I told (the group) that the water lilies are a mixture of native water lilies, called spatterdock or Nuphar advena. The other one is simply called water lily, and that one comes from the water garden that existed there in the 1890s, on the shore. What happened is that when Claude Monet brought out all of his works, including one in particular called the “Water Lilies”, in the late 1890s.

“People who came from very wealthy families not only had gardens, but also water gardens. They cultivated the water lilies in the water gardens. The Depression hit, and they’re all gone. The houses were closed and abandoned. The water lilies were dragged by wildlife into the swamp, and they have been there ever since. Water lilies are not invasive. It’s a non-native species, which is different. A non-native species actually fits into the ecology, while an invasive takes advantage of it. These are essential in providing the shaded habitat necessary for the growth and survival of native species.

“So this whole swamp was created in 2003. It’s grown a lot and it’s become very productive. We hope that the other part, downstream towards the Lea River, can take the same path. Currently, this is not the case. When they built it, they left out some components. The current is faster in there, so it will take longer to establish.

After the ecotours were completed, Leuchner said the experiment was a success.

“We had a good number of people there, and they weren’t people who looked like they hadn’t seen the environment before,” he said. “They had some experience. They were very interested in hearing an explanation of all the different things they were seeing. I think they got a lot out of it. The only disappointment we had with the ecotours was that 15 people were limited to go to each ecotour, and it turns out that a third of them didn’t have the respect to inform us that they didn’t were not coming.”

Greg Stevens, Executive Director of the Niagara River Greenway Commission, speaking about the future of Paddles Up, said, “We may have the ability to go further. As you can see from all the exhibits here, the message is very much about the ecology of the Niagara River and the special place that is Grand Island. 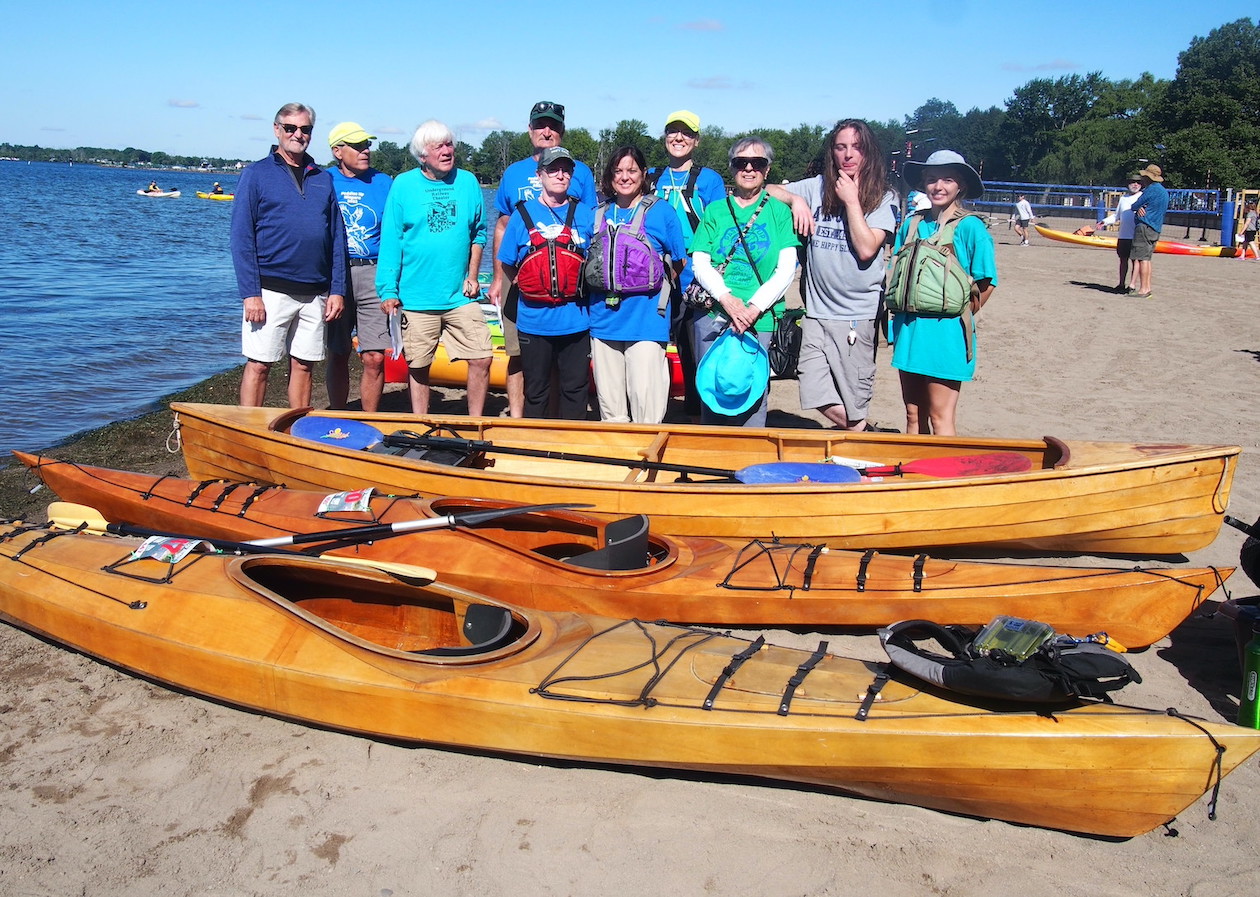