Team Maroon from the College of Liberal Arts and Sciences emerged victorious in the 2022 ASU Academic Bowl, beating Team WP Carey School of Business in a seven-round final with a score of 205-105 Thursday night at the campus of Temple.

The Annual Academic Bowl is a three-day event held in the Student Pavilion. Each 15-minute round includes two teams of four; there were 10 teams in total.

The College of Liberal Arts and Sciences entered the sixth round with an advantage and were one win away from being named champions, but WP Carey School of Business forced a sudden death final in the seventh round.

Billett, a first-year actuarial science student, said he participated because he wanted to represent the Order to the highest standards.

“This victory is incredible; it justifies everything I do here at ASU and what the school stands for – the values ​​and the academic education they provide,” Billett said. “It’s just great to have been able to do that with my team.”

For Finkbeiner, a second-year student in biological sciences (conservation biology and ecology) and economics, this was her first participation. She said it was an unforgettable experience.

“I think the best part of this experience has been meeting new people, and it means a lot to be part of this team,” she said. 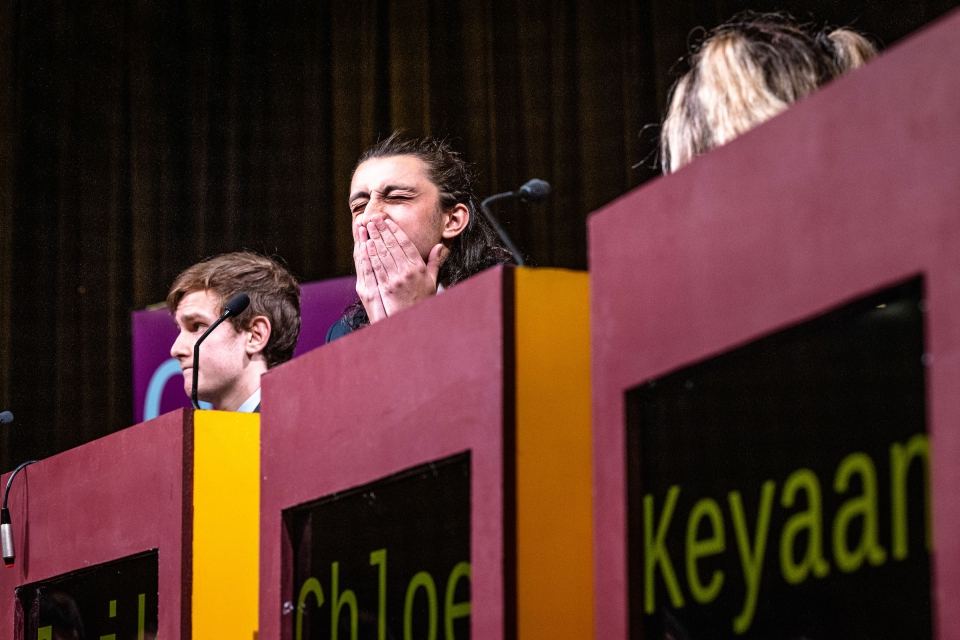 Prior to the Academic Bowl, Finkbeiner had participated in school geography bees and wanted to experience a similar event like this at the college level.

“I love being on stage, like asking your question properly. You kind of get a little rush of thrills, and it really boosts your confidence,” she said.

Due to the pandemic, there had been no Academic Bowl the previous two years. The College had won the most recent Academic Bowl before that.

Pace-Farr, a senior math and chemistry student, was part of the 2019 team that won the grand prize. He said he was happy that his team was able to “continue the legacy they left behind in 2019”.

Finkbeiner said the victory after the break meant a lot and that she hopes it will “encourage more people to join us in the years to come”. A congratulatory punch between Daniel Pace-Farr and Grayson Billett shows victory is assured at the 2022 ASU Academic Bowl. Photo by Charlie Leight/ASU News

The winning team’s preparation process involved doing weekly practice for two hours each session, testing each other’s knowledge, and timing each question to get used to the pressure of the rounds. Pace-Farr introduced his teammates to the quiz-bowl format.

Vaughn, a freshman in Applied Mathematics for Life and Social Sciences, said he prepared for this moment by “collecting facts all his life and putting them to good use.”

“My favorite part is probably how many questions I was tested on, and therefore being able to test my knowledge in all sorts of different areas,” Vaughn said.

Finkbeiner said she got to know her teammates’ strengths and weaknesses during each training session and formed a close bond with them.

The team is looking forward to defending its title next year; until then, the College can enjoy its bragging rights.

The four finalist teams – one from the WP Carey School of Business and the Ira A. Fulton Schools of Engineering, and two teams from the College of Liberal Arts and Sciences – pose for a photo after the 2022 ASU Academic Bowl on Thursday at the Student Pavilion at Temple. The top four teams shared $50,000 in prize money, with the winners sharing $26,000 and the runners-up winning $13,000. Third place received $7,000 and fourth place $4,000. Photo by Charlie Leight/ASU News

Top photo: The winners of the College Maroon team (L to R: Malachi Vaughn, Ally Finkbeiner, Daniel Pace-Farr and Grayson Billett) hold the President’s Cup after the 2022 ASU Academic Bowl on Thursday at the Student Pavilion on the Tempe Campus. The maroon team from the College of Liberal Arts and Sciences took top honors in a head-to-head with the WP Carey School of Business team. Four-person teams of college athletes competed in rounds of quick quizzes on topics ranging from political science to pop culture and everything in between. Photo by Charlie Leight/ASU News