The bald eagle nest at Dallas’ White Rock Lake that people flocked to see and conservationists scrambled to protect plummeted to the ground Tuesday after strong gusts of wind.

The nest contained eggs, wildlife officials said. How much is unknown.

Dallas wildlife and city officials were at the site late in the evening along with a crowd of onlookers. The eagles had built their nest in a poplar tree late last year southeast of the intersection of East Lake Highlands Drive and North Buckner Boulevard.

Residents approaching the area in the afternoon and evening expressed disbelief, asking if the nest had really fallen.

Sharie Hunt, who lives near the Eagles Nest, said she had been visiting the site since last year.

“They motivated me to come to the lake to train,” Hunt said. “It just brought another bit of respect to your day, to see them fly.”

When she returned from her run on Tuesday, she found out what had happened.

“It’s very sad, very heartbreaking; incredibly heartbreaking,” she said. “But that’s nature, and I hope they build another nest in a better place.”

The place where the eagles built their nest was next to several other trees that wildlife officials said were unstable.

Adding to the uncertainty, the bald eagles built the nest on a dead branch, said Sam Kieschnick, an urban wildlife biologist with the Texas Department of Parks and Wildlife.

The weather also played a part: southerly winds were expected to be between 15 and 30 miles per hour, according to NBC5.

“It really looks like this was this pair’s first nesting experience,” Kieschnick said.

The eagles will try to figure out what happened and they will keep flying. Hopefully there will be enough time in the season for them to make another nest, Kieschnick said.

“What’s important to remember here is the resilience of the eagles,” he said. “It’s probably a young couple and they’ll have a better chance in the future for the nests.”

Nature chose this place, and acceptance of that is important to “us as biologists,” he said. Even though the nest fell, it is still federally protected, he reminded people.

“Really sad to see the two bald eagles crying and calling as they circle around where their nest once was,” tweeted Ben Sandifer, a Dallas resident and longtime master birder.

The bald eagle nest at Dallas White Rock Lake fell to the ground this afternoon in high winds. Really sad to see the two bald eagles crying and calling as they circle around where their nest once was. State and city of Dallas biologists are on scene. No word on eggs or eaglets. pic.twitter.com/wMdhViSMER

Authorities had tried to protect the mating bald eagles from human interference because they feared they would leave their nests.

While locals who had been out for weeks to admire the bald eagles lamented the loss of the nest, some said they still plan to return to admire the eagles.

Mario Guerrero, who has lived in the area for 18 years, said he visits the site almost every other day with his wife.

“Even during the Super Bowl, the neighbors were here to watch it rather than the game,” Guerrero said.

He came to check on the eagles after hearing a helicopter fly overhead and learned what happened on Facebook.

Although the nest was gone, Guerrero said, he appreciated that the neighbors were able to spend time getting to know each other better while enjoying nature.

“It was an amazing experience; they are so beautiful,” he said.

Sandifer said The Dallas Morning News: “I hope the eagles can find peace and get over this horrible thing that happened to them.”

Writers Catherine Marfin and Veronica Gonzalez contributed to this report. 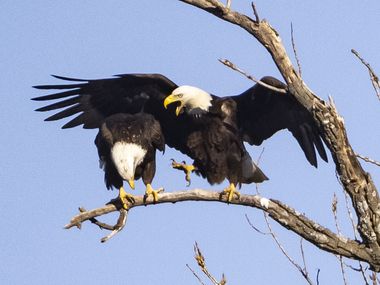