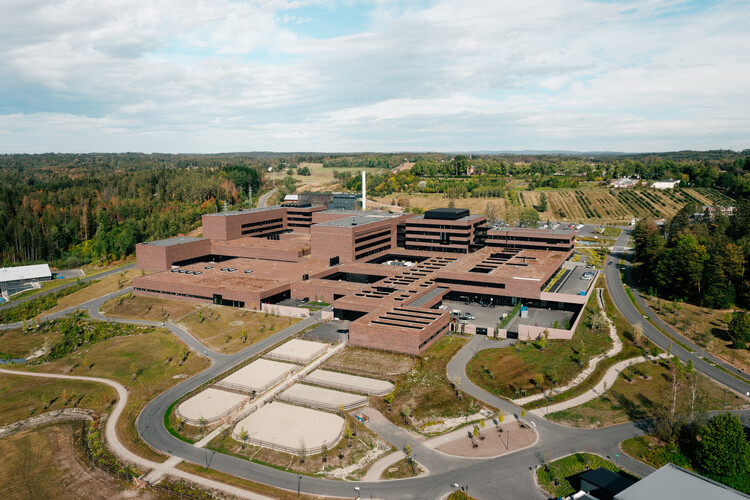 Text description provided by the architects. The 95,000 m2 building, located on the Ås campus of the Norwegian University of Life Sciences (NMBU), houses both research facilities and teaching space for veterinary medicine – one of the buildings most advanced veterinarians in Europe.

The desire to understand the natural world has always been at the heart of human innovation, but has acquired critical urgency as globalism accelerates the cycle between our impact on the world and the world’s impact on us. The new veterinary building at Campus Ås, officially inaugurated in autumn 2021, was designed with this cycle in mind. This is the biggest overall development ever in the university and college sector in Norway.

The Ås Campus Veterinary Building is actually eight separate but linked buildings, bringing together previously disparate resources (some of which were in Oslo, 30 km north of the main NMBU campus.) Developed for Statsbygg in cooperation with Multiconsult, Fabel Arkitekter , Link Arkitektur, and Erichsen + Horgen, the project is one of the largest and most complex construction projects ever undertaken in Norway.

A building on a mission. How do you design world-class research and learning facilities, where people and animals can coexist in a potentially infectious and dangerous environment? The Norwegian government is committed to becoming one of the leading countries in education and research on biosecurity and the spread of infectious diseases, and the new Veterinary Building at the Norwegian University of Life Sciences is designed to meet this ambition.

The project is a bridge between big and small, dangerous and safe, clinical and human, isolated and connected. Despite its vast scale, encompassing more than 2,400 rooms on the building’s 95,000 m2 floor space, the interiors of the Campus Ås Veterinary Building are almost cozy. The building rarely rises to four stories and is subdivided into eight wings which are themselves divided between the building’s two main programs: the Norwegian Veterinary Institute and the Norwegian University of Life Sciences.

The highly sensitive and even dangerous spaces that the campus houses, such as the infectious disease research labs and veterinary building surgical suites (and corresponding logistics spaces), are linked to the center, protected by a permeable barrier of a public program that surrounds the campus ‘ exterior. Students and university visitors can venture almost to the heart of the building without experiencing the risk inherent in the function of the building, it is divided into smaller modules which can be individually locked if required rather than putting the whole of installation in perpetual lock.

World-class research facility and open learning environment in one. Where you learn can have a huge effect on your ability to absorb and retain knowledge. Research in recent years (including that of Krister Jens, Henning Larsen’s PhD researcher) has shown that informal and social spaces within higher education institutions can have measurable learning and learning outcomes. innovation. The interconnected structures of the Campus Ås Veterinary Building work with this in mind: between stables, aquariums, animal clinics, hydrotherapy pools, riding arenas, BSL 3 laboratories, autopsy rooms, classrooms, offices, libraries and canteens, social spaces make space for researchers, professors, students and visiting experts to meet and learn from each other – both formally and informally.

Things are no less complex in research/clinical areas where, rather than facilitating informal meetings between people, the different spaces must be carefully separated to avoid cross-contamination. Even animals must be carefully separated, with veterinary programs divided between small and large animal clinics and further subdivided to separate healthy/injured animals from sick ones.

To fit in, to stand out. Behind the venerable original building of what was previously known as the Norwegian University of Agricultural Sciences in Ås, set in an open landscape of gently rolling hills, the long, low profile of the Ås Campus Veterinary Building allows it to s integrate into the environment of its campus while still standing. In a beautiful park with plants, flowers and open waterways is the new veterinary building, the color of which matches the antique buildings on campus.

The facade is made of more than 300,000 hand-cut bricks, each heated with coal to give them an individual shine and texture. The reddish-brown hue of the bricks also matches the surrounding structures on campus, some of which date back to the founding of the campus in 1859. Native plantings surround most of the new building and can also be found above, where sedum roofs support a thriving insect habitat.