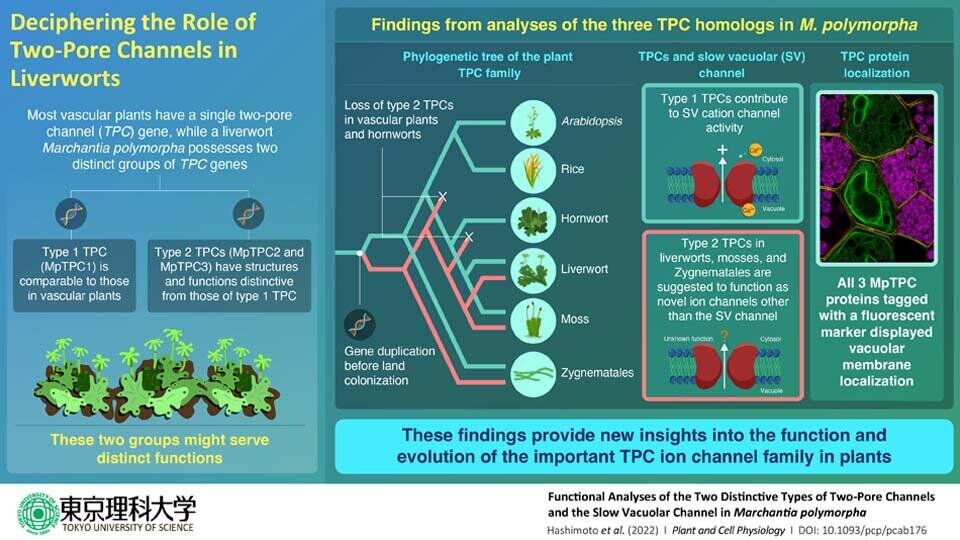 Two-pore channels (TPCs) are ancient ion channels found in animal and plant cells. In animals, including humans, these ion channels play an important role in the biological activities of various tissues, such as the brain and the nervous system. All terrestrial plant species contain TPC genes; in many higher vascular plants such as Arabidopsis thaliana (Arabidopsis) and Oryza sativa (rice), a single TPC gene is involved in the activity of slow vacuolar (SV) channels (voltage-gated cation channels) as well as signaling at long distance, defense and responses to environmental stress. However, very little is known about the function of TPC proteins in non-flowering mosses and liverworts, some of the oldest organisms on Earth.

In a recent study, a team of researchers led by Professor Kazuyuki Kuchitsu of Tokyo University of Science, Japan, collaborated with researchers from Maria Curie-Sklodowska University, Poland, to explore the evolutionary significance and physiological two-pore channels in the non-flowering bryophyte Marchantia polymorpha. Their widely recognized and appreciated article, which discusses this study in detail, was first published online in December 2021 and subsequently printed in the February issue of Plant and cell physiology. The article was also chosen as an “Editor’s Choice” and “Research Highlight” article for the journal, which published a commentary on the study. Funding for this research was obtained through a grant from the Japan Society for the Promotion of Science and the National Science Center, Poland.

M. polymorpha, or common liverwort, grows as thin, flat green leaves on moist soil or rock, and is an extant descendant of one of the first plants to colonize the earth. M. polymorpha is a simple model organism that has been used to analyze common characteristics of land plants. “We realized that the M. polymorpha genome has three TPC homologs: MpTPC1, 2 and 3, belonging to two distinct groups, the TPC type 1 and type 2 genes. We wanted to know what these two subgroups of TPC proteins do in M. polymorpha,” says Professor Kuchitsu.

To do this, the researchers first performed a phylogenetic analysis of the TPC genes in the green plant lineage. They then characterized the three TPC proteins: MpTPC1 of the type 1 TPC gene and MpTPC2 and MpTPC3 of the type 2 TPC gene. Marking these proteins with a fluorescent marker, they studied their localization in M. polymorpha cells. Through CRISPR-Cas9 genome editing, researchers developed mutant plants that lacked functional TPC1, TPC2 or TPC3 genes and double mutant plants that lacked functional TPC2 and TPC3 genes. Then, using patch-clamp electrophysiology analyses, they measured the ionic currents in vacuoles isolated from living cells of M. polymorpha plants.

The results of the phylogenetic analyzes provided interesting information on the evolutionary history of M. polymorpha. “Unlike the type 1 TPC gene, which is well conserved in all land plants, type 2 TPCs have been found in algal species. This suggests that although type 2 TPCs emerged before plants do not colonize the earth, they failed to make their way into the genome of higher vascular plants and hornworts,” Prof. Kuchitsu tells us.

The researchers also found that the three TPC proteins were mainly located at the vacuolar membrane of M. polymorpha. The mutant that lacked a functional TPC1 gene showed no SV channel activity. But mutants lacking functional TPC2, TPC3, or both showed usual SV channel activity. Molecules such as phosphatidylinositol-3,5-bisphosphate and nicotinic acid adenine dinucleotide phosphate, which activate mammalian cell TPCs, failed to affect ion channel activity in vacuoles isolated from mutant plants. Professor Kuchitsu surmises: “These observations, when tied together, indicated that type 1 TPCs – which are ubiquitous in all land plant species – are responsible for SV channels in their vacuolar membrane, but TPCs of type 2 probably encode ion channels that are different from the SV channel and animal TPCs. »

The team’s findings provide much-needed functional and evolutionary information on the important but elusive family of TPCs in plants and on plant ion channels in general. With their eye on future research, they also aim to use knowledge of the evolutionary history of plants to improve plant growth and defense mechanisms against biotic and abiotic stresses. This could benefit industries like agriculture, among others.

Provided by
Tokyo University of Science

Quote:
Lighting the tunnel of plant evolution: Scientists explore the importance of two-pore channels in plants (2022, May 2)
retrieved 3 May 2022
from https://phys.org/news/2022-05-tunnel-evolution-scientists-explore-significance.html

This document is subject to copyright. Apart from any fair use for the purpose of private study or research, no
any part may be reproduced without written permission. The content is provided for information only.

The convergence of biology and engineering