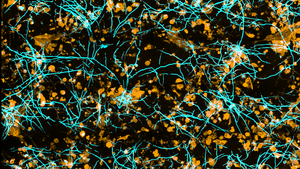 A chip-based infection model developed by researchers in Jena, Germany, allows live microscopic observation of lung tissue damage caused by invasive fungal aspergillosis. The team developed algorithms to track the spread of fungal hyphae as well as the response of immune cells. The development is based on a “lung on a chip” model also developed in Jena and can help reduce the number of animal experiments. The results were presented in the journal Biomaterials.

Aspergillosis is an infection caused by molds Aspergillus fumigatus, which often affects the lungs. The disease can be fatal, especially in immunocompromised people. In these cases, invasive aspergillosis usually occurs with fungal hyphae invading the blood vessels. So far, only a few active substances can fight against these fungal infections. “That’s why it was so important for us to be able to represent this invasive growth in a model,” says Marie von Lilienfeld-Toal, who co-led the study. The internist is a professor in the Department of Internal Medicine II at the University Hospital Jena and conducts research at the Leibniz Institute for Natural Products Research and Infection Biology – Hans Knöll Institute (Leibniz-HKI) in Jena , in Germany.

The new model of aspergillosis infection should make it possible to better observe both the growth of the fungus and the reaction of the immune system and to find new possible therapeutic approaches. In addition, new active substances can be tested. The expertise for this is available in Jena: organ chips have long been developed at the university hospital. The startup Dynamic42, which manufactures the lung chips used in the study, was founded there. First author Mai Hoang also joined the company after completing her doctorate.

From organ model to infection model

“With the help of the chip, we can observe and quantify aspergillosis in 3D live, under the microscope”, explains Marc Thilo Figge, head of the study. He is head of the applied systems biology research group at Leibniz-HKI and professor at the Friedrich Schiller University of Jena. The organ model consists of two layers of cells separated by an artificial membrane. One layer is exposed to the air and is made up of surface cells of the lung. The other layer is made up of blood vessel cells, with a blood-like nutrient solution flowing continuously past them.

To this model, the researchers then added the fungus. “In this way, we transformed the organ model into an infection model,” explains Susann Hartung, a member of the Infections in Hematology/Oncology group at Leibniz-HKI and one of the first three authors. The difficulty, she said, was establishing the right severity of infection. “If we add too much Aspergillus fumigatus in the model, the lung cells are dying. If there are too few, we don’t see anything,” adds the molecular biologist.

Human immune cells or various drugs, for example, can then be added to this system, as the research team shows in the present study.

The evaluation of three-dimensional microscopic data presented a major challenge. “If we just look at the images, we get an idea of ​​the progression of the infection, but we cannot quantify it. For that, we need algorithms that can distinguish fungal hyphae or immune cells from tissue cells. as well as the environment,” explains Zoltán Cseresnyés, who is also one of the first authors of the article. He is part of the Figge team, which specializes in automated image analysis.

To help the computer tell them apart, the different cell types are color-coded using fluorescent dyes. “For example, fluorescence intensity can be used to determine how many fungi an immune cell has eaten,” Cseresnyés explains.

“Of course, this model is a simplification and cannot be compared one-to-one with a complete organ,” says Figge. “But we believe it is an important contribution to better research on fungal infections, because at the same time it can partially replace animal experiments.” The model will now be further optimized.

The research is supported by the German Research Foundation as part of the balance of the Microverse cluster of excellence and the collaborative research centers 124 FungiNet (Transregio) and 1278 PolyTarget. The Carl-Zeiss-Stiftung funded the project of the Excellence Graduate School Jena School for Microbial Communication. Additionally, the work is supported by the Center for Sepsis Control and Care funded by the German Federal Ministry of Education and Research and the Leibniz ScienceCampus InfectoOptics.

Tissue samples produced in the laboratory

The title of the article

The authors declare the following financial interests/personal relationships which may be considered as potential competing interests: ASM is scientific advisor to Dynamic 42 GmbH and holds shares in the company. KR is CEO of Dynamic42 GmbH.

Warning: AAAS and EurekAlert! are not responsible for the accuracy of press releases posted on EurekAlert! by contributing institutions or for the use of any information through the EurekAlert system.

The convergence of biology and engineering