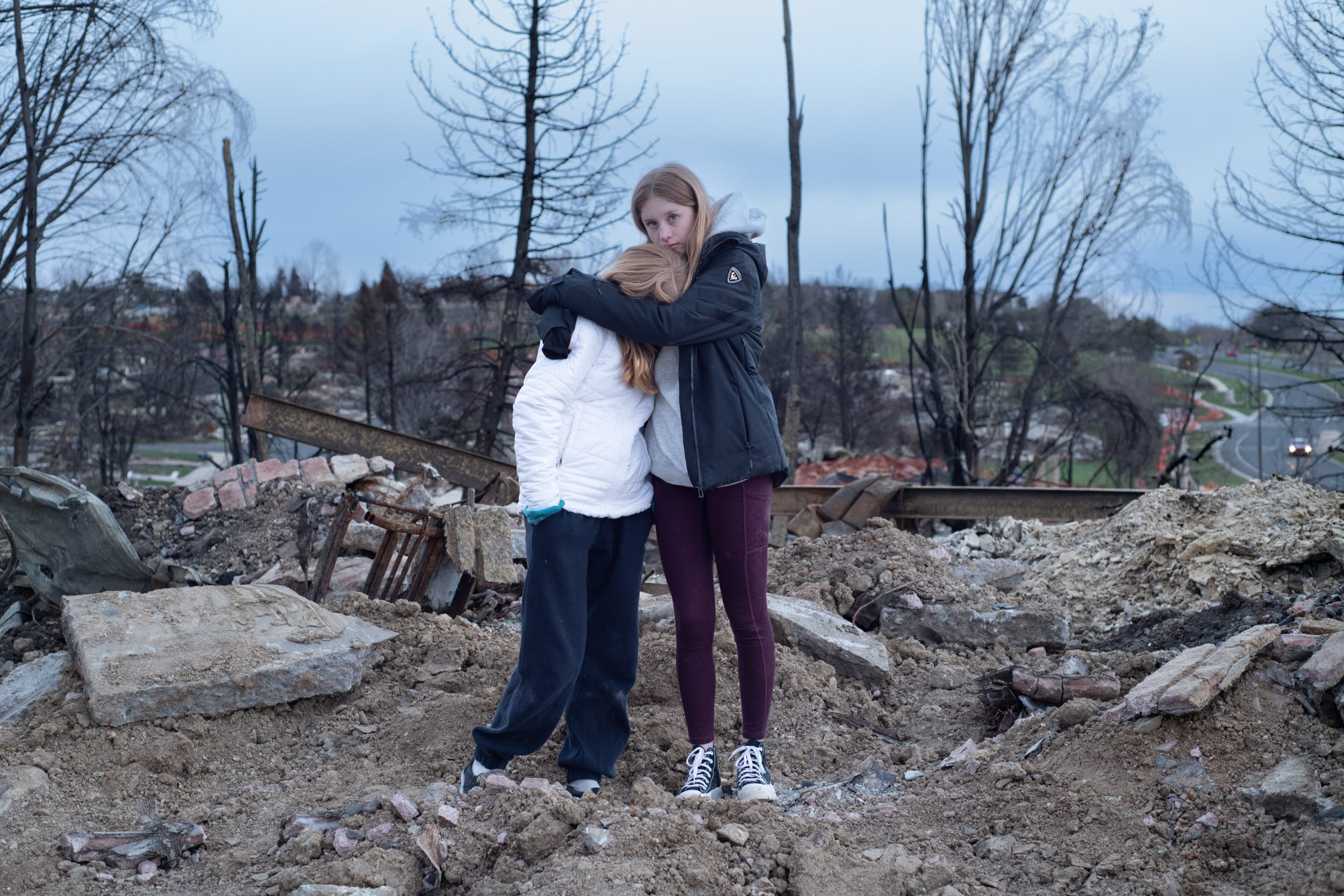 Four months after a Christmas week wildfire ripped through their neighborhoods, destroying more than 1,000 homes near Boulder, Colorado, survivors navigate post-traumatic stress disorder, dizzying bureaucracy and the prospect of a new normal for wildfire season.

The Marshall Fire, Colorado’s most destructive blaze on record in terms of property loss, tore through tight-knit suburban communities in Louisville and Superior, as well as rural swaths of unincorporated Boulder County, on 30 December 2021. A local fire official warned that wildfire season is now ‘year-round’, after a subsequent blaze in Boulder in March – the NCAR Fire, named after the National Center for Atmospheric Research overlooking the location where the fire burned – scorched 190 acres and forced the evacuation of 8,000 homes.

Climate change is lengthening the wildfire season in the United States, increasing the average size of fires and causing them to burn more intensely, according to research compiled by the Environmental Protection Agency. Fires are also burning more frequently in landscapes where they were once rare. Most of the twelve families of Marshall Fire survivors interviewed for this story said they did not consider their homes threatened by wildfires at any time of the year, let alone in December, given their remoteness. forests.

“Never in a million years would I have thought Louisville would be hit by a wildfire,” said Leslie Mathis, a finance coordinator who lost her home there. “It took everyone by surprise.”

Here are some survivor stories:

Janet Rodina, 71, planned her final years. She had a two-year-old home in Old Town Superior, near her children and granddaughter, in which she could grow old. She filled it with a greenhouse, young tender roses and a motorhome to explore the national parks. “I intended to live here for the rest of my life,” she said, “but it all went down in a few hours.” She settled into her home during an intense year during which she underwent brain surgery, was treated for breast cancer and entered into a divorce. “I was making new friends, and it just slipped my mind.”

“I felt very stripped of everything,” said Dani Mathis, 30, who lived in her childhood home with her mother, Leslie Mathis, 62. Dani said she felt she had lost her connection to her father, Steven, who died at home in his sleep in 2010. The only memory she has of him is a ring she wore at the time. ‘fire. Her ashes were lost in the rubble, along with three cats, Chloé, Zoé and Rue, who died in the fire. Leslie said the tragedy had made her more aware of global warming: disasters associated with climate change, she said, “are going to be our new normal”.

As a single mother of three in 1994, Sarah Sierra worked 250 hours to build her home in Superior, hammering and painting alongside friends and Habitat for Humanity volunteers. Owning a home “was my golden dream,” said Sierra, now 75 and retired from working for the Boulder Valley School District. At the time of the fire Sierra was living there with her grandson Matias Adrian Olivas, 18 (pictured) and son Adrian “I almost died the day of the fire,” she said, but ran to the car with her dog and escaped. She said she lost many things that cannot be replaced, including a colorful woolen blanket her father made from a sheep they raised in his childhood home in Zacatecas, Mexico.

“Our living room was on fire when we left,” said Jerolyn Ochs, 57, a telecommunications analyst who lived in Louisville. Among the things she won’t be able to replace are her late mother’s paintings and all the photos of her dead son-in-law. She and her husband Steve had paid for their home through years of hard work, she said, but it will take another $300,000 beyond what insurance will pay to rebuild the home as it was. before it burns. “I’ve been working since I was 16,” she says. “Now it’s like, are we ever going to be able to retire?”

Reina Pomeroy, 37, had lived in her house for just 20 weeks before it burned down. “It was meant to be our forever home,” said Pomeroy, who moved to Louisville from California in the summer of 2021 with her husband David and their 8- and 2-year-old sons. They spent at least 50 hours on the phone with their insurance company to determine their coverage. Although the police are less than 6 months old, it will not be enough to pay to rebuild the house as it was before, she said. The couple will have to start rebuilding with no guarantee that they can get a policy extension to cover the extra costs. Moving to Colorado during the Covid pandemic meant Pomeroy hardly knew anyone when she lost her home, she said. After the fire, she co-founded a group called Marshall Together, through which neighbors share recovery tips and resources. “It’s been a gift to be able to connect with people,” she said. “It’s the weirdest silver lining in this experience.”

“Is our house going to catch fire?” Isla, 9, started asking her parents at a young age when she saw or heard of forest fires. “Never. Unequivocally no,” Shannon Cox Baker and her husband, Chad, both 44, told him of their home, which was perched on a ridge on scenic Panorama Drive in unincorporated Boulder County. Today, natural disasters “make us wonder what the future is for life on the Front Range” in Colorado, said Chad, a biologist. “It’s this constant feeling of foreboding,” a Shannon, a real estate developer, said “How hot is it going to be? How smoky? … It’s depressing, it’s nerve-wracking. As she oversees new affordable housing projects in Colorado, the Arizona and Utah, she said, “There’s a constant thought in my mind: Should we live here? Should we grow up? It’s an existential challenge.”

Bonnie Smith, 92, and her late husband, Dean, built their home in 1968 in a rural part of unincorporated Boulder County so they could have a horse. Smith, who raised three children there, lost pieces of history in the fire: 450 rare books, her mother’s quilt and all of her wedding photos. The hardest part of losing your home, she said, is “when you can’t find anything that indicates you’re married.” Although the rebuilding will take time, her son, David Smith, plans to install a hot tub and RV on the property this summer so she can spend time where she loves.

Stephen Van Leir, 53, pictured with his wife Elizabeth, 36, loved collecting and rebuilding cars. In the wreckage in front of their home, he planted an American flag on a burnt-out Jeep chassis, next to a hollowed-out 1970 AMC Javelin. Van Leir, a construction manager, said the hardest part of losing her home was feeling unable to provide for their four children, aged 9 to 14. They’re renting an apartment, he said, but it looks like they’re on a long road trip, eager to be home. The cost to rebuild their 1,400 square foot home may be double what insurance will pay, he said, but “our goal is to rebuild.”

“You spend your whole life working to get to that place in society where you have things, and then…it’s vaporized onto the earth,” said Mike Macinko, 54. The fire destroyed both the house he lived in, in Superior, and a house he owned in unincorporated Boulder County (pictured), which he was repairing for rent Losing it all was “the greatest exercise in mental toughness of my entire life”, he said. “I think it’s because you have to force yourself to re-emphasize things.” Macinko said he felt changed: “I realized I could get by with a lot less. It made me more detached from things. …I’m going all out, doing everything I can today to get the most out of my life. I don’t think I was like that before the fire.

Sheryl Buchman and her three children moved into the Upper Sagamore neighborhood nine years ago, shortly after her divorce. “It was our starting house. We could breathe here,” said Sheryl, pictured with her 16-year-old son Evan. As the fire approached, she stayed behind to rescue a disabled neighbor who was sleeping in the basement as the house was on fire. Now Sheryl is in treatment for PTSD. Anything that reminds her of that day, including high winds, brings her to tears, she says. “It’s really, really hard.” Sheryl, a medical assistant, said she was type A, but the fire changed her: “I’m so much more laid back,” she said. “I’m so easily with the flow now. No matter what you do, something can suddenly change your life.

ICN provides award-winning climate coverage and advertising free of charge. We rely on donations from readers like you to continue.

23 bald eagles have died from the HPAI virus